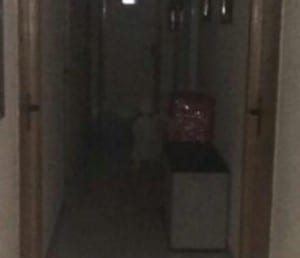 INHABITANTS of a small Granada town are clamouring for the mayor to bring in an exorcist because the council offices are ‘haunted’.

The problem in Vegas del Genil began when a councillor working late took a photo of a hallway, which appears to show the ghostly figure of a child.

He took the photo to see what was there after having heard a ‘strange noise’ in the hallway, ‘like someone was dragging files across the floor’.

He also claims that the office was ‘unusually cold’.

The image sent the man into a ‘state of panic’ and he locked himself in his office and sent the photo to a WhatsApp group of his colleagues, one of whom came to take him home.

In the following weeks council staff complained of ‘inexplicable cold’ in that corridor, despite the heating being turned on and fully functional.

One of the councillors even invited a Reiki practitioner to carry out a ‘cleansing session’, and she reported ‘feeling a presence’.

Mayor Leandro Martin has now been inundated with requests to call in ghost hunters or a priest to conduct an exorcism.

But the mayor is a sceptic. ‘It’s a collective psychosis’ he said, ‘how can I justify hiring a medium when I have residents without electricity?’