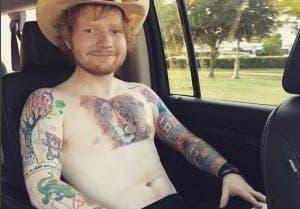 ED Sheeran has revealed that he passed out while getting a tattoo of a famous Spanish church.

The Shape of You singer, who is thought to be worth more than €40 million, had Barcelona’s Sagrada Familia inked onto his stomach during his trip across Australia last year.

“I passed out while it was being done,” admitted the 25 year old, who has an astonishing 60 tattoos covering his body.

The Suffolk-born superstar, whose new album Divide is penned for release on March 3, has vowed to have another 30 tats on his back.