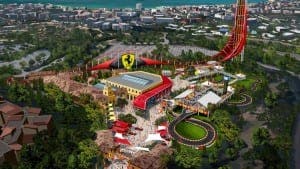 FERRARI Land has begun selling its first tickets as new details about Spain’s first car-themed amusement park have been revealed.

The Barcelona park will feature a vertical accelerator that rockets thrillseekers up over 100 metres in just five seconds.

Other attractions include Ferrari Land Gallery, an interactive exhibit that takes you through the history of the legendary Italian car maker, a racetrack, free fall tower, F1 simulators, pit stop, and speedway for kids.

There will also be three different shows.

Sprawling across 70,000 square metres and costing €100 million, Ferrari Land is the younger sister to Ferrari World in Abu Dhabi which opened in 2010.

The park will officially open April 7 and adult ticket prices start at €60.