EVERY day, the N-340 ferries Gibraltarians, Spaniards and sun-seeking tourists along the coast. But 80 years ago this month, this main artery became the road to hell.

The Malaga to Almeria road massacre is one of the most shameful episodes in the bloody carnage of the Spanish Civil War. In February 1937, with Malaga besieged and attacked from land, sea and air. Thousands of refugees fled the city and headed northwards.

Most were children, elderly and the sick. That didn’t spare them. They were strafed by Franco’s air force and navy, with thousands killed.

“You can’t imagine the desolation,” recalls one old lady, a survivor, in Yo Estaba Alli, a documentary and oral history of Malaga during the war by University of Malaga Professor Fernando Arcas.

“It has been calculated that there were more than 100,000 on the road,” Professor Paul Preston told the Olive Press.

“It is impossible to know accurately but the death toll seems to have been over 3,000.” 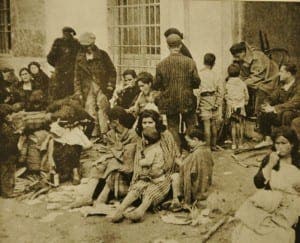 The parallels with modern atrocities in places like Syria are stark. But this slaughter happened on a road most of us travel along each day.

The estimated casualty rate was far higher than at Guernica, where it is thought up to 1,650 perished at the hands of the German condor legion. And yet the world seems to have forgotten the Malaga massacre.

During the Franco dictatorship, Arcas tells me, the regime did their best to cover up the atrocity.

“Books about the war by English writers like Gerald Brenan and Hugh Thomas were circulated clandestinely because they were banned,” he tells me at a well-attended Costa Press Club screening of his film.

“But under Franco the story could never be told. In the case of Guernica, Picasso did a huge painting and exhibited it in Paris and the story of what happened there became infamous.

“The Malaga massacre had no painting.”

The anniversary has been marked by a series of events. One group are retracing the refugees’ steps and walking from Malaga to Almeria. A memorial exhibition marking the event has opened in Almeria.

At the Costa Press club screening, Arcas gave a talk about the effects of the war on Malaga, and launched his new book, also entitled Yo Estaba Alli.

But the first book published about the atrocity was written by Norman Bethune in 1937, a Canadian anti-fascist doctor who travelled with the refugees as they fled from Malaga. The Crime of The Malaga to Almeria Road is cited by Arcas as the key first-hand document of what took place.

Horrified by the dimensions of the Dantesque scenes he encountered, as Franco’s men mowed down the defenceless group, Behune bravely used his medical skills to help the injured. It is believed he was one of the only doctors travelling in the convoy. A street has been named in Bethune’s honour in Malaga.

Bethune’s photographs of the desperate refugees are a vital document of an atrocity which few now living can remember. During Arcas’s 2006 documentary, old Malagueno survivors of the war recall, often in heartbreaking detail, what happened 80 years ago.

At the start of the film, one old man goes through the names of his friends and family who died. He reels off 20, the names all painfully etched into his memory. His words are fired with the ferocity of bullets.

Another old lady recalls how they fled Malaga when they heard rumours that approaching Francoist troops were cutting off Republicans’ heads.

“My father carried the smallest child on his shoulders,” she recalls.

“The bombing was so savage we had to travel at night. There were shooting us from above, shooting from behind.” Fascist ships travelling up from Estepona continued the bombardment from sea.

One man describes how, after the fascists had executed his father, he was forced to sing their anthem Cara Al Sol (Face To The Sky). “My father’s blood was still fresh,” he says.

Another man, the rage welling up inside him, spits out his anger at General Franco.

“He was a murderer. A million dead, just like that,” he says.

“I’ve seen so many things. Many people killed.”

For Arcas, a close friend of historian Paul Preston, the battle for Malaga, and the horrors of the road to Almeria, were a grim prelude to the second world war.

“The Malaga Almeria massacre was an antecedent of the huge civilian displacements that took place from 1939,” he tells me.

Franco used Moroccan, German and Italian troops to take the city, an international alliance which was a microcosm of what was to come in 1939.

“We don’t know exactly how many died on the road to Malaga,” says Arcas. Perhaps it will never be known, despite the good work of men like Emilio Silva, whose ‘Association for the Recuperation of Historical Memory’ search for the bodies of Franco’s victims buried in unmarked graves.

And 80 years on, the same horrors are still carried out. But for Malaga, read Aleppo.

Other News
Tracy Storer - 17 Aug, 2022 @ 15:44
Could you be paying less for your Investments and Pensions? I’ve just come out of a regular review with one of my clients, and top...