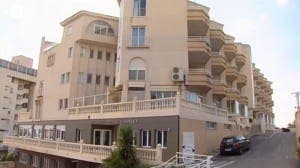 AN 86-year-old Brit has been arrested on suspicion of stabbing his wife to death.

The body of the man’s 79-year-old wife was found at the Orpea nursing home, near El Campello on Sunday morning.

The pensioner was arrested and taken to hospital, as he had tried to harm himself after the attack.

He is said to have suffered minor self-inflicted knife wounds.

Local police said they are treating the incident as a case of domestic violence.

A member of staff said the couple had not been living in the residential nursing home for long.