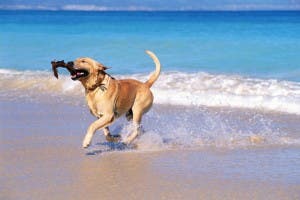 DOGS will be able to go on Marbella beaches for the first time this summer.

For seven months from March 15, pooches will be allowed to play on two separate stretches totalling 500 metres in length.

Part of Marbella’s El Pinillo and Nueva Andalucia’s Ventura del Mar playas which are less suitable for sunbathing have both been designated for the temporary zones.

Miguel Díaz, Marbella councillor for sustainability, said that an ‘increasing demand for dog zones over the years’ had led to the decision to create them.