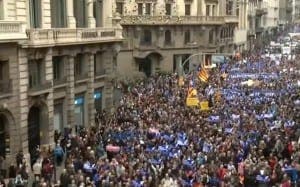 TENS of thousands of demonstrators have marched in Barcelona to demand that Spain welcomes more refugees.

Protesters carried signs with slogans such as ‘refugees welcome’ and ‘no more excuses! Let them in now!’

Barcelona police said that 160,000 people were at the march, while organisers insist that up to 300,000 took part.

In September 2015 Prime Minister Mariano Rajoy promised to accept 17,337 refugees from camps within two years: 15,888 from Italy and Greece and 1,449 from Turkey and Libya.