FLASH flooding has caused major destruction on the Costa del Sol this weekend.

Buildings flooded, roads collapsed and cars were washed away as a storm lashed the Malaga area.

Emergency crews were called to more than 200 separate incidents.

There were a number of landslides, a homeless shelter on Ollerias street was flooded and the awning of building on Bolivia street crashed to the ground. 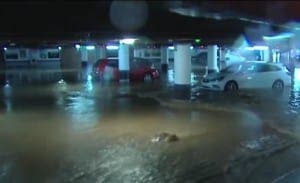 Some parts of the area saw 130 litres per square metre of water fall in just three hours.

There have been no reported fatalities or injuries.