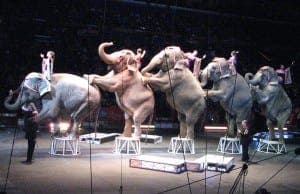 ACTIVISTS have demanded a meeting with Andalucian politicians to ban animal circuses.

Animal rights group Toniza is hopeful that Chiclana Town Hall officials will accept its invitation to discuss why it continues to allow travelling circuses with performing animals to stop in the town.

It is the latest step in the group’s campaign to stamp out Big Top business when animals are part of the show.

It made the request after Joaquín Páez Landa, the town’s environment councillor, admitted to a local TV channel that the council had  ‘begun a period of reflection’ on the issue.

Animal circuses have already been banned in almost 300 other Spanish towns.

“We don’t think there is any legal reason why an agreement (to ban circuses with animals) cannot be made, as has been done in many other towns” said a group spokesperson.

“The Ley Andaluza 11/2003 forbids the practice of any activity that could cause suffering to animals and the keeping of them in inadequate facilities.

“In light of all the evidence available, we think the council must not allow circuses with animals to stop in the area.”

Alex Trelinski - 26 Jan, 2022 @ 17:59
SUICIDE is now the second-biggest cause of death, after cancer, among Spaniards aged 15 to 29 years, according to figures from the Spanish Asssociation...