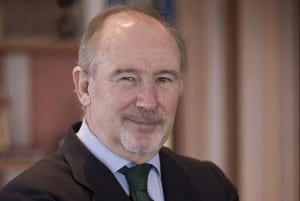 FORMER IMF chief Rodrigo Rato has been convicted of misappropriation of funds.

Rato, who headed the International Monetary Fund (IMF) from 2004 to 2007, has been sentenced to four and a half years.

The former Partido Popular finance minister and an ex-chairman of Caja Madrid is one of 65 officials found guilty over their use of complimentary credit cards.

Between 1999 and 2012, high-ranking officials at Caja Madrid (which later merged to form Bankia) were given credit cards that drew from a bank fund.

The cards were used to splash €15.5 million on personal expenses, which did not show up on bank documents, job contracts or tax returns.