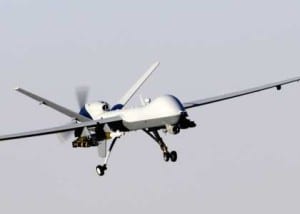 UNMANNED drones could be used to patrol Spain’s borders with Morocco at Ceuta and Melilla.

The interior ministry’s secretary for security Jose Antonio Nieto has confirmed interest in introducing airborne surveillance along the borders of the Spanish enclaves.

It comes just days after hundreds of migrants stormed into the country from Morocco by scaling the border fences.

Last month a border officer lost an eye when a 1,100 strong group stormed the fences.

Nieto has since personally visted Aeorum, a leading drone developer in Spain, to discuss the idea.

The drones would be equipped with heat-detecting cameras which would give early warnings of groups gathering to mount an offence at the border.

Despite Spain erecting high fences topped with razor and barbed wire, they are still being climbed over by migrants desperate to reach European soil.

Some 850 have managed to enter the country so far this month.

Spain has been met with criticism by leading human rights groups for its treatment of migrants.