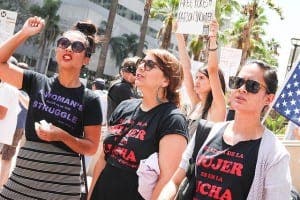 WOMEN across Spain are planning to strike on International Women’s Day in protest against gender inequality in the workplace.

Strikes have been a part of the commemorative day on March 8 before, but are set to be bigger than ever this year.

A Twitter hashtag, #NosotrasParamos (we’re stopping), has been created to organise and promote the strikes.

The Feminist Movement of Madrid has called on Spanish women to stop working between 12pm and 12.30pm on March 8, and to take to the streets in protests at 7pm.

It comes after a recent report showed that Spanish women earn 23.25% less than their male counterparts.