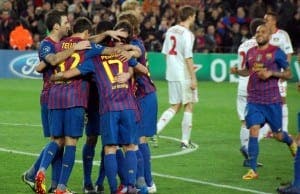 BARCELONA FC have been praised by football fans and the world’s media after their ‘unbelievable’ comeback at home last night.

The Nou Camp club managed to beat PSG 6-1, overcoming both a 4-0 first-leg deficit and an away goal scored by Edinson Cavani to progress in the Champions League.

They added that the game ‘entered the history of football’.

Barcelona coach Luis Enrique said after the match: “It was more than a thriller.

“It is difficult to explain in words.

“This is a sport for crazy people, a unique sport. Any kid who was in the Camp Nou tonight will never forget this in their life.

“It was a torrent of feelings. I don’t cry – I would like to, but the tears don’t come out.

On the winning goal scorer Sergi Roberto he added: “I say to Sergi Roberto: ‘You used to score for the youth team, why do you never do it for the first team?’, And then, what the hell, he goes and gets that goal tonight. I am delighted for him – I have a lot of trust in him and affection for him.”