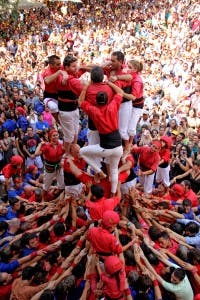 A FREAK human tower accident in Tarragona has killed one man and seriously injured another.

The 51-year-old victim was crushed by a metal structure during a training session in the Catalan port city. Two other team members, aged 50 and 52, were treated in hospital for their injuries.

Human tower building is a Catalan tradition dating back to the 18th century in which teams, or ‘colles’, climb on top of each other’s shoulders to create a tower with a minimum of six ‘human storeys’. The current record of nine levels (12 metres) was established in 1981 and has been equalled but never beaten.