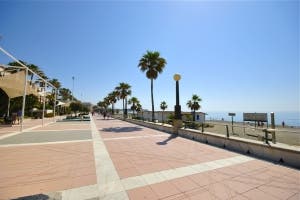 POLICE in Estepona are searching for ‘gypsy-looking’ man after he allegedly tried to abduct a three-year-old girl.

Described as balding, around 50 years old and with a scar on his face, he allegedly tried to snatch the British girl after telling her he would buy her sweets.

Policia Local said they were investigating following the mother’s claims, but they have yet to make an arrest.

The alleged incident is said to have occured around 3pm last Tuesday as the 27-year-old expat mum was taking her daughter to dance class in Estepona.

She claims the stranger grabbed her daughter’s hand and promised to buy her sweets after getting a young boy who was with him to strike up a conversation.

According to the mother, they both fled after her daughter began screaming for help.

She called the authorities immediately before sharing a warning on Facebook.

She said: “Please be aware that in the Estepona area there is a man in his 50s going around trying to take children.
“He attempted to take my daughter. He uses a child to talk to the other children and then takes their hands and tries to take them.

“The police have been informed and are doing everything they can to find them.

“The man has greying hair and a scar on the right side of his head.”

A police spokesman said: “We are investigating an allegation from a woman who says someone tried to take her child.”

The man in question was wearing dark blue trousers and a black shirt.

The boy with him is thought to have been aged around seven.

Cristina Hodgson - 2 Dec, 2022 @ 09:15
A WOMAN and a man have lost their lives and a four-year-old child has been injured in a tragic traffic accident on Wednesday night,...