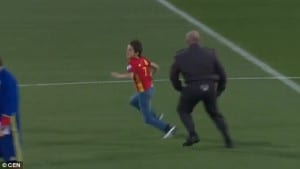 The young boy, named Beltran, ran right past one security guard with an impressive speed.

He then runs across half of the pitch before being met by another heavy-set security guard who clammers to catch the speedster.

He manages to get past with a classic side step that Ronaldhino would have been proud of.

After making his way past the likes of David De Gea and Sergio Busquets, he can be seen making a beeline towards Real Madrid’s Morata and giving him a hug.

More security tried to usher the boy away, but Morata can be seen embracing him and allowing him to stay.

The striker signed the young fan’s Spain football shirt, writing: “For my friend Beltran, with all my love.”

Footage of the incident has gone viral, with hundreds of thousands of views on Facebook and Youtube.

Spain are currently to of Group G in the race for the World Cup 2018 in Russia.