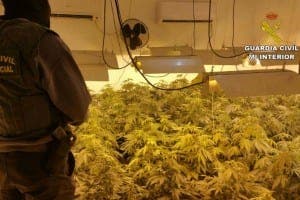 The bust also culminated in the seizure of €6,000 in cash and growing equipment.

It was the latest incident in a province-wide crackdown which has seen thousands of plants seized.

The two dealers arrested have allegedly masterminded smuggling operations across the continent, and have been charged with funnelling electricity from other sources to power the greenhouses.