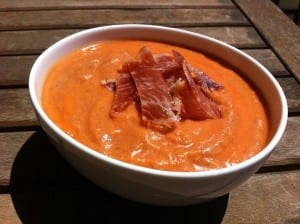 A CONGRESS has been called to pay homage to a beloved Andalusian soup.

Salmorejo, a cold tomato puree thicker than gazpacho, will be celebrated on June 15 and 16 at the Palacio de la Merced in Cordoba, the city where it was invented.

Chefs, historians, anthropologists, food critics and journalists will come together for the inaugural Congreso Nacional Salmorejos, which also hopes to shed light on the mystery roots of the dish.

But it will not just be the Andalucian version, which is topped with egg and jamon serrano, that will go under the spotlight.

Diverse versions from other Spanish regions such as Aragón, Castilla-La Mancha, Canarias and Extremadura will also be showcased and analysed.

Said Miguel del Pino, President of organisers the Cofradía del Salmorejo Cordobés: “We want to create an investigation into this emblematic dish.

“We decided to have the event after holding several forums on it which were very successful.”

After the event, this ‘brotherhood of broth’ hopes to create a salmorejo map which details the various versions in Spain, with information on their similarities and differences.

For more information, go to www.congresonacionalsalmorejos.es.