Murals are the new metropolitan art brightening up cityscapes and Estepona is leading the way.

WALK through the backstreets of Estepona and count the massive murals adorning its high rise buildings – you could be forgiven for thinking Banksy had paid the town a clandestine visit.

Ranging from homages to Miguel de Cervantes to celebrations of the town’s seafaring history, the diverse daubs are a prominent part of one of the Costa Del Sols most aesthetic towns.

They are not a traditional feature, only appearing in 2012 as part of a council scheme designed to improve some of the town’s forgotten neighbourhoods.

But with the number of murals now standing at almost 40, the town is set to make a big deal of it with its first ever International Art Mural Competition. In July, 70 artists from all over the world will be invited to contribute their perspectives and compete for a prize of €10,000.

To mark the event, take our tour of some of the most eye-catching Spanish murals you won’t find in Estepona.

A massive black moggie stalks across an industrial building in Murcia. Leaves suggesting a concrete jungle adorn the bottom of the building where a normal-sized man can be seen cradling his cat. 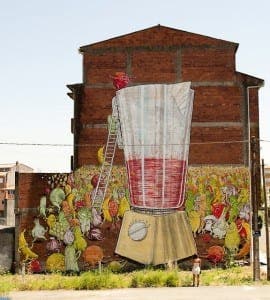 This stop-you-in.your-tracks mural with its nod to Hieronymus Bosch’s Garden of Earthly Delights can be found in Ordes, Galicia. The work of Italian artist Blue, it features a tribute to vegetarianism with produce praying to a blender.

The Basque capital of Vitoria-Gasteiz is known as the Painted City for its murals which are featured on a walking tour. ‘The Thread of Time’ recalls its medieval past when it traded in fine fabrics. 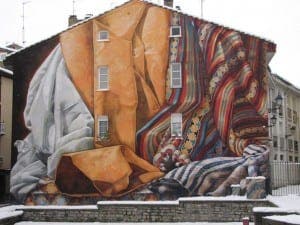 It’s not always apartment blocks or houses that are illuminated by murals. In this instance it is a the Plaza de Armas bus station in Sevilla. The calmness of the sleeping girl is offset by the vivid colours.

Street artists Shepard Fairey and D*Face teamed up for these two murals in Malaga. Located on an estate next to the Centre for Contemporary Art,  the pair were created for a street art festival. 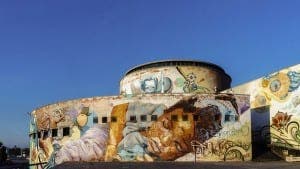 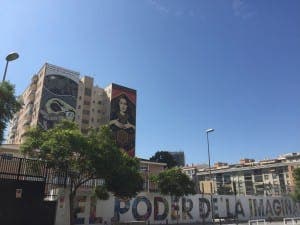