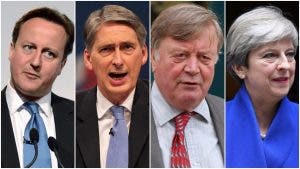 The Conservative heavyweight has advised May to ‘consult more widely’ with other parties, saying there will be ‘pressure for a softer Brexit.’

Former Conservative chancellor Ken Clarke backed Cameron’s remarks, saying new trade barriers ‘between us and our most important market in the world’ should be avoided at all costs.

It comes as current Chancellor Philip Hammond is reportedly leading a Cabinet push for May to abandon plans to pull out of the EU’s customs union.

Leaving the customs union would impose tariffs on British exporters, plus the huge red tape of filling in forms and putting goods through customs checks.

“A hard Brexit was not endorsed by the electorate,” he said.

Theresa May has to date ignored the calls, forging ahead, at least publicly, with her hard Brexit strategy.

Meanwhile, an announcement on her much-needed pact with the DUP has been delayed yet again following a devastating fire in an apartment block in West London which has left at least six dead.

Speaking in Paris yesterday, alongside French president Emmanuel Macron, she claimed: “The timetable for the Brexit negotiations remains on course and will begin next week.”

Cameron’s remarks came during a conference in Poland, where he warned the dramatic election results have made May’s approach ‘difficult’.