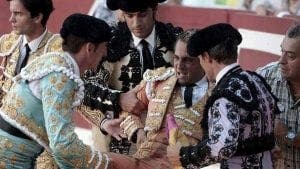 SPANISH bullfighter Ivan Fandino has died after being gored by a bull in southern France.

The 36-year-old was entertaining a crowd in Aire-sur-l’Adour yesterday when he tripped on his cape and fell to the floor.

The bull swiftly gored him savagely in his right flank.

The Basque bullfighter, from Bilbao, was rushed to a nearby hospital after undergoing an emergency procedure at the bullring, but he was announced dead on arrival.

His last words are said to have been ‘Hurry up, I’m dying!’ as he was being rushed to the hospital.

He is the second Spanish bullfighter to die in 12 months after the death of Victor Barrio last July.