AT least 43 people have been killed by catastrophic forest fires in Portugal.

Around 60 forest fires are believed to have broken out across the country last night, with Coimbra being the most affected.

As many parts of the blaze have not yet been reached by firefighters, the death toll is expected to increase.

Prime Minister Antonio Costa said: “Unfortunately this seems to be the greatest tragedy we have seen in recent years in terms of forest fires.”

It is reported that the fire in Coimbra is no closer to being contained despite 600 firefighters battling the inferno.

The cause of the fires is unknown but it is suspected thunderstorms could be a possible cause.

The mayor of Coimbra’s Pedrogao Grande, where the fires are still raging, said he is ‘completely stunned’ by the number of deaths.

It comes as Portugal is experiencing a heatwave, with temperatures around the 40C mark.

Spain has been on alert for heatwaves all week, particularly in Granada and Cordoba, where there were also storms forecast for this weekend.

AEMET also warned of the risk of fires. 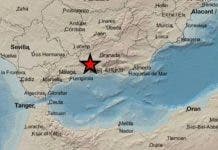