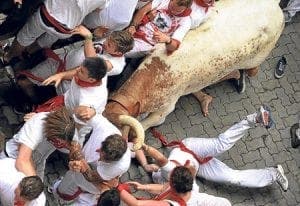 AT least five people have been wounded in the second running of the San Fermin bull festival in Pamplona this morning.

The run, which lasted four minutes – longer than usual – saw one man gored in the arm and another in the backside.

An additional three were trampled but managed to escape being gored.

They have all been transferred to hospital.

It comes after two US tourists were gored and trampled amid chaotic scenes at the start of Pamplona’s world-famous bull-running festival yesterday.

One man was lanced in the scrotum and another in the chest after bulls from the notorious Cebada Gago ranch rampaged through the streets.

One participant was hurled high in the air and smashed back down on the ground.

Another was hoisted in the air by his white trousers and left dangling upside down for several seconds on the end of another bull’s horn.

Two of those gored during the first day were from the US, aged 29 and 35, while a third was a 46-year-old from Navarra in Spain. A man from Ireland, 39, was also hurt.

Yesterday also saw an animal activist jump into the bullring to shield an animal that lay bleeding and dying from knife wounds.

Three anti-cruelty campaigners disrupted one of the first events in the festival, which is set to bring in more than one million people from around the world.

The trio stormed the arena after matador Pablo Hermoso killed the first bull of the tournament in front of a huge crowd.

Organisers slammed their actions as irresponsible, breaching security arrangements and causing an unsafe situation which could have endangered the lives of other people.

The activists said it was ‘worth it’ to highlight the ‘cruelty of bullfighting’.