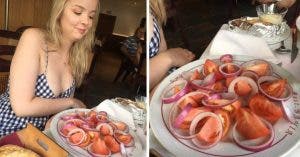 A BRITISH vegan’s reaction to a salad she was served on the Costa del Sol has gone viral.

Georgina Jarvis ordered the salad on advice of the restaurant in Malaga while dining with her sister Gabbie.

However the plate of tomatoes and raw rings of onion she was given didn’t quite meet her expectations.

“I think we expected more of a salad for her with some lettuce and other veg maybe not just that,” sister Gabbie said.

“When she received the food I couldn’t help but laugh, we made pretty awkward eye contact with each other as staff were still serving us but I knew we were thinking the same thing.”

Gabbie tweeted a photo of the rather minimalist plate which sat in front of Georgina’s unimpressed face.

It gained more than 10,000 retweets and over 43,000 likes within hours– and many comments from social media users who could completely relate to Georgina’s disappointment.

“The food was disappointing compared to the options there are in England but I was very happy that they accommodated to me,” said Georgina.

“Veganism, in my opinion, is the most sensible option for the well-being of animals, for the environment and for your health. Veganism has made me into a more compassionate person, and I urge people to consider even cutting down on meat, maybe making a vegetarian meal a couple of times per week.

“The tweet posted may make veganism look like an extremity and inaccessible, but in reality I normally have no issues eating out in restaurants, and normally have many options.”