The Oscar Niemeyer cultural centre in Aviles was intended to have a similar effect to the Guggenheim in Bilbao, a short hop along the Green Coast. 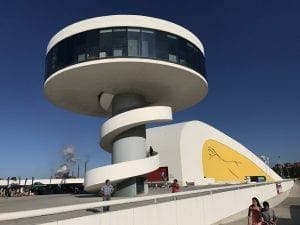 But, while it definitely has its allure, it is not quite as striking as the wonderful art museum in the Basque region. That said, the €44 million centre, designed by Brazilian architect Niemeyer is well worth a visit, particularly as it is a fascinating link between the city’s industrial past and its medieval core, across the city’s main river.

It is just a stone’s throw from Spain’s leading steel works, Ensidesa, which can be seen smoking behind it and the whole industrial backdrop is interesting. There are usually art exhibitions going on and the tower – reminiscent of a formula one race track – compliments the snaillike buildings alongside it. 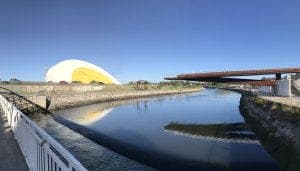 The centre has different architectural spaces that are distinctive for their design and functionality. The least well-known of Asturias’ trio of cities (Oviedo and Gijon are the other two) Aviles is wonderfully laid-back, friendly and cultured. But it has been rightfully described as the ‘Cinderella’ of them all. It once had one of the best harbours on the northern coast and for centuries did well out of fishing and trade.

However, not unlike another city in Southern Spain (Algeciras), in the early 1950s the rot set in and Avilés was earmarked for an industrial future by Franco’s government. The wetlands of the estuary were partially drained, the course of the river altered and the giant factory complex including steel works and smelters moved in.