SAN Pedro de Alcantara is dressed for all kinds of success, and I don’t mean flamenco costumes (although look out for them if you’re down that way in mid-October. 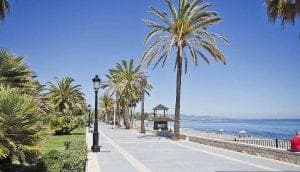 The San Pedro fair famously closes the feria season here). Like this season’s debutantes, Marbella’s ‘kid sister’ has come out in style, stepping from behind her sibling’s shadow into the limelight with glitzy attractions, gourmet eateries and resident celebs all of her own.

In my 15 years of having a home here, I have never seen the place go through so many transformations. For a couple of years now, where snarled lines of traffic once backed up along the coast road, a striking urban boulevard sprouting trendy pavement cafes has reclaimed the once maligned area. With a new skating rink, a skate park and a hat trick of new children’s play parks, the seaside town is unrecognisable from a few years ago.

And it is still in transformation, investing more than €2 million in reinventing its town centre, with semi-pedestrianised zones between the boulevard and its commercial heart. This expat favourite, which continues to offer one of the most authentic Spanish pueblo vibes on the Costa del Sol, is also getting a new museum dedicated to the artist Vicente de Espona.

And perhaps more fortune will come its way after its main political party, Opción Sampedreña (OSP) helped bring back former Marbella Mayor Angeles Munoz in a dramatic vote of confidence at the town hall this summer. There are also rumours that former UK premier Tony Blair has bought a holiday home in the town’s exclusive Guadalmina urbanisation.

And he wouldn’t be the first world leader to set up shop here, with ex-Spanish premier Jose Maria Aznar among them. Meanwhile, the head-turning footbridge with its serpentine coils, is doing for San Pedro what the Golden Gate did for San Francisco and the Guggenheim for Bilbao. And although very much part of the municipality of Marbella, San Pedro has forged its own shiny new identity that’s quite separate, yet complementary to, its jet-setting neighbour.

Just 10km west of Marbs, it has been reborn over the last decade as a modernised microcosm of Spain. But some things have never changed in all the years I have been visiting the town, named after 16th century Franciscan friar, St Peter of Alcantara. The evenings still see veteran San Pedranos gather on shaded benches around St Peter’s statue, outside the parish church; the traditional Saturday market remains a weekly highlight; and the pavement cafes and ice cream parlours are heaving on Sunday nights in summer, when Spanish families enjoy their ritual paseo along the prom.

the face of massive investment from Marbella Town Hall – nearly €100 million. It must have felt like winning the lottery jackpot but San Pedro has spent the money wisely. The central boulevard, crowned by its snaking pedestrian bridge, has turned the town from an also-ran suburb into a spanking new social hub where whole families come to skate, hang out and enjoy the regular food truck festivals.

Office workers make a beeline for its congenial cocktail bars on Friday nights. The bridge may be more Gehry’s Guggenheim than typical Andalus but it has forged strong new connections with visitors who used to think Marbs ended at Puerto Banus. The €6 million boulevard it meanders over boasts an amphitheatre and is now the official site of the town’s four-day feria, the last of the year in Andalucia, timed to celebrate St Peter’s feast day on October 18. 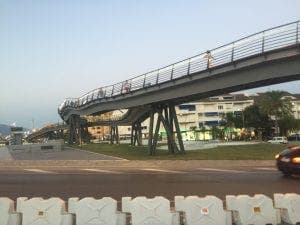 Other welcome upgrades have included the €85 million tunnel diverting dangerous high-speed traffic below the town centre, and a much-needed underground car park. “San Pedro really does have it all,” says local Sean Woolley, 47, who has run an estate agent from the town for 15 years. “The new boulevard and urban park have become a magnet for new restaurants and bars and it has created a place that now offers something for everyone,” he says proudly. “There is this charm and tradition of a typical Spanish town fused with trendy and cosmopolitan additions, from organic cafes to lively wine bars.

When you couple this with its sandy beaches and fabulous promenade, San Pedro is pretty much perfect.” Beneath the glitzy exterior, San Pedranos are as friendly and unassuming as they were in their 19th century farming days. And if anything is a reminder of those rustic origins, it’s San Pedro’s resident pig! On any given Sunday this sociable creature and town mascot can be seen strolling around its new neighbourhood, uttering contented grunts of approval. Army General Don Marquez Manuel Gutierrez de la Concha founded the farming colony in the 1860’s when he acquired nearly 5,000 acres of agricultural land across Marbella, Benahavis and Estepona.

But with malaria scything through the local populace and poor irrigation, the Marques introduced a series of innovative reforms, including an agricultural school for local farm workers, river bridges, dams and state-of-the-art machinery. Workers soon flocked from Valencia, Murcia, Granada and Almeria, and San Pedro grew into a sizeable municipality. A statue of Gutierrez now stands next to the old town, keeping paternalistic vigil over his creation. Although development slowed during the early 20th century when Spain was ravaged by civil war, the town bounced back during the late 1940s and 50s, with street lighting and a main road. But San Pedro has never seen the rampant over-development of other costa resorts. Central to its evolution has been its bustling beach promenade that links seamlessly to Banus and Marbella, putting the town on the map for cyclists, joggers and walkers.

Its beaches fly the prestigious blue flag, the worldwide standard of excellence, while chic chiringuitos like Macaao and Guayaba are hotspots for the cool and hip. The once-barren wasteland between the boulevard and the ocean now sports shops, restaurants, residential communities and world class amenities like Nueva Alcantara paddle and tennis club, which hosts regular international tournaments.

The beachfront also reveals clues to the presence of less-recent visitors – a 3rd century Roman baths and a 16th century watchtower looking out over the panorama of sun worshippers and jet skiers. While, set back from the waterfront action, you’ll also find relics of the 6th century Paleo-Christian burial site, Vega de Mar, excavated in the 1930s.

A new road network has also made San Pedro more accessible to visitors and local chefs have cooked up an exciting dining scene in response. Just behind the boulevard, Alfredo’s traditional Spanish fare is always in big demand while next door La Bodega del Cantinero offers an exciting foodie fusion featuring foie gras with apple and honey, tuna tataki with wasabi mayonnaise and shelves of vintage sherries.

Further additions like L’impronta, Tutemaki and Restaurant 1870, where you can enjoy spider crab gazpacho in a scenic garden setting, have made San Pedro a key dining reference. And there’s more. San Pedro has its own leafy satellite suburb in the shape of Guadalmina (Baja and Alta), just west of the town centre.

Guadalmina Alta, on the opposite side of the A7, has an 18-hole course and the coast’s only cable ski lake which thrill seekers can circuit on water skis or a wakeboard. “I adore it here, you feel like you are in the real Spain,” raves 39-year-old Guadalmina newcomer and artist Debbie Lush. “You are so close to Marbella and Estepona but without the madness and business of Puerto Banus, it’s perfect. “You can walk to the beach, cycle to Marbella and there are so many good places to eat, you have everything on your doorstep,” she adds. Like most locals, these days, she’s proud to tell anyone who asks that, no, she’s not Marbelli – she’s ‘Sanpedrano, actually’.