POLICE hunting fugitive Mark Acklom, one of Britain’s most wanted men, have expressed concern about his two young daughters.

His Spanish wife, Maria Yolanda Ros Rodriguez, 47, is believed to have left with him, taking their children aged six and eight.

“We believe Acklom and his wife are in the company of their two daughters, girls aged eight and six,” said Detective Inspector Adam Bunting, of Avon and Somerset Police.

“We believe they will be enrolled at an international, fee-paying school on the continent.”

Authorities believe Acklom could still be in Spain.

The two girls had attended the El Limonar private school in the village of El Palmar.

“As they are living on the run with their father, who is a wanted fugitive, we have significant concerns for their wellbeing.”

Acklom, who has gone by the name Marc Ros Rodriguez, was photographed in Geneva in May with Spanish scammer Jose Manuel Costas Estevez.

The British conman had been jailed three times in Spain. 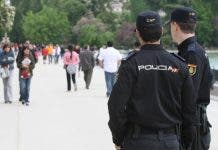