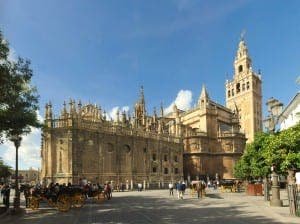 SEVILLA has been named the best city in the world to visit next year by travel guide Lonely Planet.

The Andalucian gem beat the likes of Hamburg, Oslo and Detroit in the 2018 Best in Travel ranking decided on by a panel of experts and based on suggestions by travel writers, editors and bloggers.

“Once a traffic-congested metropolis resting on its historical laurels, Seville has bloomed into a city of bicycles and trams, keen to reinvigorate its artistic past,” Lonely Planet wrote explaining its decision.

Next year is a notable one for the city, as it hosts the European Film Awards and expositions celebrating famed painter Esteban Murillo.

Its recognisable Game of Thrones filming locations also gave it a boost.

The Andlucian capital’s highlights include outstanding examples of Moorish architecture like the Alcázar palace and the Giralda minaret, as well as its Gothic cathedral which is the final resting place of Christopher Columbus.

It’s also considered the birth place of flamenco and is home to two of Spain’s most supported and most successful football teams, Real Betis and Sevilla FC.