ACTIVISTS have been forced to highlight the continued pollution on a popular Mallorca beach.

Mallorca Blue posted a video from Can Pere Antoni showing more burned plastic which the group claims had been in the sea for three months.

The film also showed used sanitary towels that had washed up on the shore.

“The worst is not what you can see, it’s what is invisible,” said a spokesperson.

Can Pere Antoni sits next to the Palacio de Congresos which was recently inaugurated by King Felipe and Queen Letizia.

The beach recently lost its blue flag over burned plastic believed to be used in the rebuilding of Palma Port. 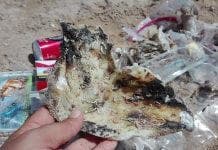 Isha Sesay - 31 Jul, 2020 @ 13:53
The Ministry of Health revealed that an outbreak had been detected among staff working at the Iberostar Club Cala Barca in Santanyi

Quarantine for returning UK travellers branded ‘disastrous’ by Balearic Islands and as ‘reaction to Spain’s transparency’ on coronavirus figures...