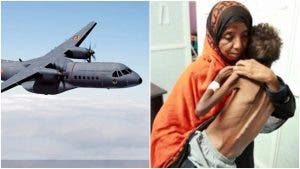 THE UAE has signed a contract with Spain’s Airbus Defence and Space company for five C-295 military transport aircraft.

The Middle Eastern state’s military announced the deal on the sidelines of the Dubai Airshow today.

Major General Ishaq Saleh Al Baloushi, head of the Executive Administration of Industries and Development of Defense Capabilities at the UAE Defence Ministry, didn’t say how much the contract was worth.

“This purchase highlights the commitment to the development of the Armed Forces and the provision of all the elements that enable them to carry out their responsibilities and fulfil their duties,” Baloushi said in a statement released by the UAE armed forces.

The UAE is a key member of a Saudi-led coalition that intervened in the Yemen war in 2015 after the Iran-aligned Houthi rebels marched on the southern port city of Aden and forced President Abd-Rabbu Mansour Hadi to flee.

Yemen is currently gripped by a famine, caused by a Saudi-led blockade.

The UN estimates that some 17 million Yemenis are in urgent need of food, seven million of whom are facing famine.

The outbreak and spread of cholera in the country has reportedly infected nearly 900,000 and cost some 2,000 lives.

A Saudi-led coalition backing Yemen’s government has said yesterday that it will not allow rebel-controlled air and sea ports to reopen until a better system is put in place to prevent alleged weapons smuggling from Iran.

It came after it said it would end the blockade on the country’s airports and ports two days ago.