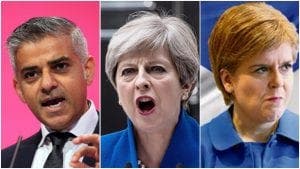 LONDON, Scotland and Wales have all demanded the same Brexit deal purportedly being offered to Northern Ireland.

As Theresa May meets with chief EU negotiators in Brussels, rumours are swirling that Northern Ireland could remain part of the EU while the rest of the UK leaves.

Nicola Sturgeon, Carwyn Jones and Sadiq Khan have called for Scotland, Wales and London to be offered the same deal if it happens.

Brexit talks have been stuck in the mud over what the border between Northern Ireland and the Republic of Ireland will look like.

Today, European Council President Donald Tusk seemed very happy about progress on the issue, tweeting: “Tell me why I like Mondays!”

While we don’t know details about his talks with the Irish Taoiseach, he is likely referencing a special deal where Northern Ireland stays aligned with EU regulations.

It would be extremely controversial if so, with the Unionist party DUP likely to object to having separate rules from the rest of the UK.

A spokesman for Theresa May previously denied this was being considered, saying: “The prime minister has been clear that the UK is leaving the European Union as a whole and the territorial and economic integrity of the United Kingdom will be protected.”

But Scottish First Minister Nicola Sturgeon said today: “If one part of UK can retain regulatory alignment with EU and effectively stay in the single market (which is the right solution for Northern Ireland) there is surely no good practical reason why others can’t.”

Welsh First Minister Carwyn Jones said: “If one part of the UK is granted continued participation in the Single Market & Customs Union, then we fully expect to be made the same offer.”

London Mayor Sadiq Khan joined in, saying: “Huge ramifications for London if Theresa May has conceded that it’s possible for part of the UK to remain within the single market and customs union after Brexit. ‘Londoners overwhelmingly voted to remain in the EU and a similar deal here could protect tens of thousands of jobs.”