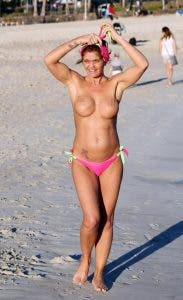 DANIELLA Westbrook has been showing off her figure on the beaches of Marbella.

The British soap star, 44, was snapped strolling topless in the sand after taking off her bikini top and using it as a bandana.

Giving passers-by and fellow beachgoers an eyeful, she headed to the water while topless to cool off in the warm sea.

It comes after she suggested she was flying to Poland to receive a boob job and other cosmetic surgeries last year.

The mum-of-two said at the time: “Can’t wait to go to Poland on the 6th of June . Face lift boobs and teeth being sorted.”

It is unclear whether she went through with the work as she later warned people off having plastic surgery after she had to undergo a six hour op to rebuild her jaw.

The former Eastenders actress said: “Anyone thinking of cosmetic surgery should look at me and think again because this is how you can end up.

“I am never going to look the same ever again. People don’t realise surgery isn’t worth it. So what if you’re not perfect? Nobody’s perfect.

“But if your body has the wrong reaction to surgery, you’re screwed.

“You could spend the rest of your life getting something fixed you didn’t need in the first place.”