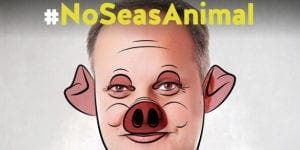 A NEW campaign has labelled ‘street compliments’ as a form of ‘socially accepted gender violence’.

Launched by the Junta de Andalucia, the campaign labels men who cat-call or wolf whistle at women as ‘animals’.

In a video, cat-calling men appear as pigs and vultures while the tag line says ‘don’t be animals’.

It is designed to ‘prevent a socially accepted form of gender violence’, which normalises the role of women as sex objects and in some cases leads to violence.

While some have welcomed the campaign, others have blasted it.

One social media user said it was ‘another crude attempt to demonize man and control our lives.’

Others said women should see the comments in the streets as a compliment and ‘should be flattered’.