A BRIT was left puzzled after she booked Ryanair tickets online and charged a payment fee despite card surcharges now being illegal.

Lucy Drake, 35, from Walthamstow in London bought eight return tickets from Birmingham to Faro, Portugal using her debit card through its app on Saturday evening.

Despite her booking them on same day that a new EU directive banned surcharges on card payments, she was charged £41.14 as an additional payment fee. 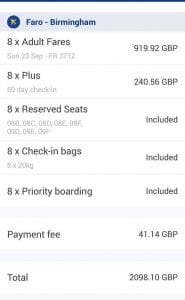 Taking to Twitter to question the airline, they replied stating that it was infact a handling fee.

Commenting further on the situation a Ryanair spokesperson said: “There is no payment fee or handling fee when customers book with Ryanair.

“We removed the 2 per cent fee on Wed 10 Jan but some older versions of the app split the presentation of the total fare payable into 98 per cent in a fare ‘box’ and 2 per cent in a payment fee ‘box’.

“The total fare was accurate but the breakdown shown was erroneous.”

Sorrel Downer - 26 Jun, 2022 @ 12:00
Demand for rural properties continues to grow as people dream of swapping a home in the city for a fixer-upper with nice views and...