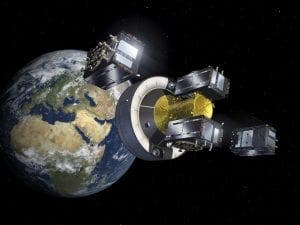 PART of the Galileo satellite system installation is to be relocated from the UK to Spain thanks to Brexit, the European Commission has announced.

The important technology – the back-up security monitoring centre for Galileo, Europe’s advanced version of GPS – was awarded to London eight years ago after a highly-competitive process.

The centre was set to become fully operational later this year.

It controls access to the satellite system and offers 24/7 monitoring of it when the head security centre in Paris is offline.

A spokesperson from the Commission said: “Today the Committee of the member states’ representatives met and we can confirm that the committee voted in favour, by a large majority of our commission proposal to relocate the centre to Spain.

“This is what we can say today. As is the case with all committee procedures the college [of commissioners] will now formally adopt this decision in its meeting next Wednesday.”

The announcement is a further Brexit-related blow to the UK’s space industry.

It comes after aerospace firms and the Royal Aeronautical Society in November said they were being excluded from contracts because of the EU divorce.

The relocated back-up security centre is expected to employ as many as 30 people when it becomes fully operational in Madrid – with additional benefits for prestige and local expertise.