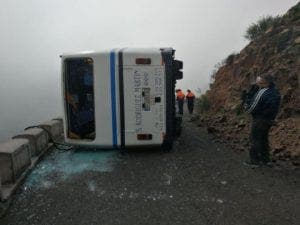 A COACH carrying British tourists has overturned on a ‘sheer drop’ in Spain.

Two Brits have been injured after the coach carrying 22 holidaymakers flipped over on a mountain road in the Canary Islands.

A 70-year-old man has been rushed to hospital with serious head injuries while a 67-year-old woman suffered a back injury.

Dramatic pictures show the coach flipped on its side with its windows smashed just yards from a sheer drop. 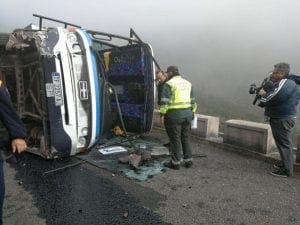 The vehicle’s brakes reportedly failed on a hill between Paredes and Alajero at around 10.40am this morning.

He said: “The driver said he had problems with the brakes and he pulled off a very intelligent manoeuvre because he managed to make sure the vehicle overturned on the road without going off the side. 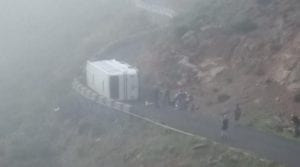 “Fortunately there was no loss of life. Two people have been injured, one seriously.”