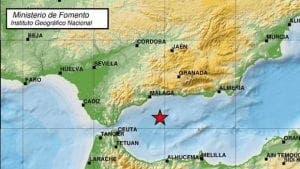 NINE earthquakes have shaken southern Spain in less than 24 hours.

The first struck Olvera in Cadiz and was 3.4 on the Richter scale.

It was felt by residents in the town ‘very slightly’ but there were no reports of damage or injuries.

The quake was followed by two more in nearby Pruna in Sevilla, with magnitudes of 2.2 and 1.7.

They came less than a day after Olvera was also the epicentre for two quakes measuring 3.1 and 3.3.

Last night, four earthquakes were recorded in the Alboran Sea just off the Costa del Sol with magnitudes of 2.3, 2.4, 2.6 and 3.0.

Olvera was hit by another two earthquakes this morning with magnitudes of 1.8 and 1.9.