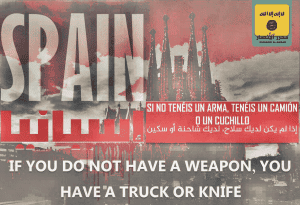 SICK death cult ISIS has called on its followers to carry out attacks in Spain.

The image shows the Sagrada Familia in Barcelona and said those without weapons  should use a vehicle or knife.

It reads: “If you don’t have a weapon, you have a truck or knife.”

It comes seven months after the shocking attacks in Barcelona saw 16 killed and more than 150 injured.

According to the intelligence community, it is ‘likely’ the twisted terror group has begun a recruiting campaign in Spain since the attack as it was the most recent high-profile assault in Western Europe.

Regional Director of Intelligence at MAX Security Solutions, Oliver Wiltshire told The Sun Online: “This message stands as proof of the continuing power of the Islamic State ideology among radicals in Europe and the group’s popularity in Spain, despite losses in previous areas of operation.

“There appears to be an imminent threat of lone wolf attacks coming from locally radicalised individuals in the country, and particularly in Barcelona.”