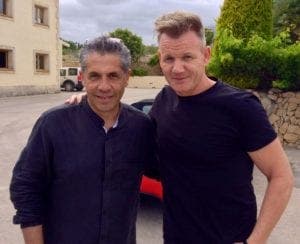 THERE was a time when life was as sweet as a good glass of Rioja for Pancho Campo, founder of Spain’s Academy of Wine.

The former tennis pro who coached the Chilean women’s tennis team at the 1992 Olympics and ran a successful events management business in Dubai during the Nineties, staging concerts for a string of massive stars including Sting, Pink Floyd and UB40.

However, after the 9/11 terrorist attacks the business understandably struggled and he closed the company and left the UAE for Marbella.

Here, the Chilean expat, 56, founded the Wine Academy of Spain in 2003 and – being a staunch environmentalist – he worked with US Presidential hope Al Gore on climate change issues in the wine industry. He also launched a wine business in America.

All went well and in 2008 he even became one of just 300 or so people in the world to achieve the distinction of becoming a Master of Wine, a massive distinction.

He and his American wife Melissa settled well on the Costa del Sol, with their two children and helped to open an American school, which has gone on to thrive.

Indeed, everything was fine, until in 2009 on a routine business trip to America to meet legendary wine guru Robert Parker things took an incredible turn.

When he landed in Chicago, Homeland Security refused to let him into the country.

The reason? An Interpol Red Notice had been slapped on him by the UAE, which ultimately orders authorities anywhere in the world to arrest and extradite him.

“It was like in the cowboy movies when you see your picture on a wanted poster, although this time it was the Interpol website saying simply ‘Wanted’. I couldn’t believe it,” he recalls.

Campo, who had never even heard of a red notice, was forced to fly directly back to Paris where police told him they couldn’t find anything about the case and let him go.

Fortunately for him, the extradition request in his full name Francisco Armando Campo Carrasco was denied by Spain on the grounds the accusation against him was an economic and civil issue, not a criminal one.

But things got worse when the following year, he received a letter saying he had been sentenced ‘in absentia’ during a trial which took place months after he and his wife had left Dubai. No lawyer was appointed to defend him.

The international media inevitably caught wind of the conviction, leading to Campo’s reputation being ripped to tatters.

“It affected my children and family a lot,” he said. “It was a true nightmare and very stressful.”

For nine long years he was unable to return to the US, which meant he had to close down his successful wine business there.

“It was worrying because I thought my kids would go to university in the US and if they ever needed their father or anything happened to them and they needed me there, I wouldn’t be able to travel,” he said.

His children, Andreah, 17, and Christian, 12, are American by virtue of his American/British wife.

But he never gave up the fight and after years of legal attempts to quash the conviction, he got the good news last month.

The cancellation of the Red Notice came after his lawyers demonstrated incorrect procedures had been followed by the UAE, as well as a breach of Interpol regulations and international laws.

The UAE claimed Campo had fled the country, following a complaint filed in Dubai by a former partner in 1999. However, his lawyers could prove that the authorities there knew he was in fact returning to Spain, and had even given them his address.

“It is as if my life has been on hold all these years and the relief that I can fly into a country with my family without fear of arrest is wonderful.”

And Campo is not alone in his ‘ridiculous’ situation.

One Englishman recently called him for advice after being issued a Red Notice by the UAE for not paying his rental car fees for three months. “How ridiculous is that?” he laughs.

“The dispute I had was a civil matter and not criminal. But money disputes in Dubai can be treated as criminal. If you don’t pay a credit card for a few months this can go to court and becomes a criminal offence.

“The Dubai authorities have used Interpol as their private debt collection agency. My name should never have been on their list.”

Campo’s legal team are now considering action to restore his name and reputation, starting with an appeal to the European Court of Human Rights. He is expecting damages. And deservedly so.

Meanwhile, life goes on in Southern Spain. He is hosting the Andalucia premiere of Al Gore’s second movie An Inconvenient Sequel: Truth to Power in a fortnight in Marbella, and his American College in Spain business goes from strength to strength.

“You’ve just got to get on with it in the end,” he explains. “I’ve never stopped doing that.”