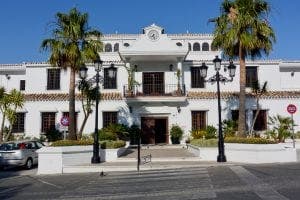 MIJAS, whitewashed walls bordering narrow, cobbled streets just wide enough for two donkeys and carts to pass. A short step back to a time when life was simple, uncomplicated; to where the cares of the world belong to another place, far away.

Okay, that’s enough. Now it is time to wake up, pull back the veil and uncover the nefarious goings on in the back rooms of Mijas politics, to uncover a government which can’t govern, but hangs onto the illusion of power, and paints the canvas of …. well actually, they can’t paint either.

You know that it is a slow news day when all you read is that ‘Donald Trump’s socks don’t match’, ‘man runs naked into a cactus’, or ‘movie star clogs the toilet on set’. No such problems in Mijas this month with rich pickings for those of us who would like to see a team with, shall we say, a bit more neural activity.

There’s the Paddle Tournament. Last August, the main square in Mijas Pueblo underwent a three-stage metamorphosis: building site, empty stadium, bomb site; costing €250,000,000 euros; more than five times what it cost in Valladolid. According to businesses in the village, the mess and chaos cost them business rather than the contrary. The announcement that it will return this August has been met with rabid belligerence on the part of the business community as well as residents.

Then there is the Field of Dreams Football Club in Calahonda.  The councilor for Sport has decided that as they are not municipal, i.e. receiving Council funds to run it, they cannot play in the local League. According to the Team Coach, Matt Gore, Ms Rodriguez turned up to one meeting to tell them they were being kicked out and went missing in action at the time of the second meeting. Another problem sorted, but not for the kids of the football team.

Shall we move on to selling off the family silver? Apparently, the Council doesn’t want responsibility for its services. They were defeated on the outsourcing of tax collection which was estimated to cost Mijas €6.6 million. They are trying to bash ahead with selling of sports services, even though they have been warned that the procedure they are following is illegal and will cost the taxpayers in excess of €1.5 million euros more.

Just think what that extra money could do in extending services. Unions and staff are flooding the Council chambers, organising strikes and demonstrations. Oh, and did I mention that they seem to be preparing to sell off Parks and Gardens services to a private company, too?

I am running out of space here, but it would be rude not to mention services operating without contracts, 35 vehicles off the road because they have no ITV, or the illegal budget which only scraped by with the aid of the Mayor’s casting vote. Not a slow news month by any stretch of the imagination. My mind goes to the Chinese curse, ‘May you live in interesting times.’

Cristina Hodgson - 9 Aug, 2022 @ 12:15
A PARROT that had been stolen from Alhaurin last May, has been found and returned to his owners. Thanks to the bird’s frequent and insistent...