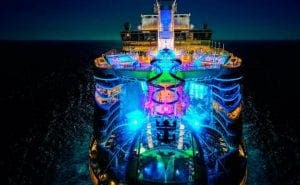 IT is the biggest cruise liner in the world.

And it is about to make its inaugural voyage to Malaga!

Dubbed as ‘the ultimate playground for guests of all ages’, Symphony of the Seas is set to be shown off to the world’s press in the city on March 27.

Boasting 18 decks, cabins to sleep 8,000 travellers and a staggering 20 different restaurants, it has cost over a €1 billion to build.

The main body of the 1,188-foot-long ship, owned by Royal Caribbean, was completed last year and its interiors have now been almost completely kitted out.

Weighing in at 228-tons, it is set to set sail from Saint Nazaire shipyard in France in two weeks.

As well as the record number of restaurants, it counts on six bars, including one where you get served by robots.

For kids there are 23 pools and a series of waterslides, one the biggest on any ship at sea.

From November, the ship will make Florida, her year-round home, taking holidaymakers on seven-night Caribbean voyages.

Royal Caribbean’s boss Michael Bayley said: “Symphony of the Seas will offer some new surprises for our guests to create a holiday that adventurers of all ages can enjoy together.

“Symphony will introduce the most cutting-edge, customisable, and digitally-enhanced experiences in the Royal Caribbean fleet.’