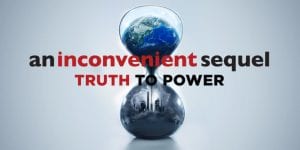 An Inconvenient Sequel: Truth to Power is the greatly anticipated follow-up to Gore’s 2006 Oscar and Nobel Peace Prize winning documentary, An Inconvenient Truth.

Some 12 years later, the sequel looks at the drastic development of the climate crisis and Gore’s struggle to convince world leaders to invest in renewable energy in the run-up to the Paris Climate Conference in 2017.

The two hour documentary aims to educate the public in a bid to encourage more to take action in the fight against climate change, as he battles Trump’s denial of the crisis.

Almost a thousand people turned up to see the two screenings at the Cines Teatro Goya in Puerto Banus on Tuesday.

The screening was preceded by a 30 minute speech about the effects of climate change in the Costa del Sol presented by Pancho Campo, who is on the advice board of ‘The Climate Reality Project’ led by Gore.

Campo recently secured Barack Obama as the guest speaker at the 4th World Conference on Climate Change and Wine.

Speaking about the effects of the climate crisis in Andalucia, the wine expert showed shocking predictions – researched by Gore’s team – about sea level rises.

Images flashed up of popular beaches in the Costa del Sol engulfed in water in only a matter of 30 years.

“This is something we have to solve ourselves… we can’t wait for the government and foundations to solve the problem,” he said.

The environmentalist talked about the importance of everyday choices to help save the planet, such as recycling and taking an active interest to find ways to create less carbon emissions.

Campo added: “We desperately need the planet, it doesn’t need us. We have borrowed it, it’s not ours.”

The event was organised by Marbella Against Climate Change, a new environmental initiative headed up by the Ayuntamiento de Marbella.