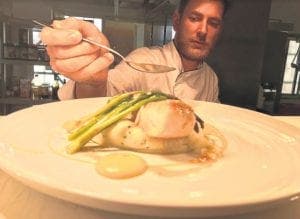 As has the British ambassador, who popped in for lunch with a trio of local mayors on a whistlestop trip to Mijas this month.

But now everyone can sample the delights of French chef Joffrey Charles de Saint Georges (to use his grand full name) who is now in his second year in Mijas.

Classy Joffrey’s Las Mimosas is the realisation of a dream for the 28-year-old maestro, who has royal roots from Normandy, alongside his vivacious former TV star partner, Lisa Burgess.

It is already becoming the talk of La Cala thanks to Joffrey’s artistic flair and culinary passion.

“It’s something we’ve always wanted to do together,” explains Lisa, who was the fashion expert for TV3’s Ireland AM for a decade.

“Joffrey has been working as a chef since he was 15 in some of the best restaurants around Europe, including spells in Val D’Isere, Dublin and London.

“He cooked for Prince Charles at a party of his in London and for Madonna and Kate Moss in Corsica.

“What Joffrey does is food art. His dishes look beautiful and he is so passionate about what he does.”

The pair met at a friend’s chalet in Mont Blanc, deciding to head to the sun after a successful stint in Dublin. 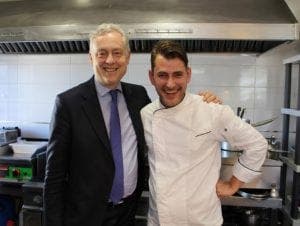 “Joffrey had been working at the city’s fine dining restaurant Marcel’s but wanted to be his own boss, as did I after 10 years working for TV.

So we decided to throw ourselves into the fire. “We looked at many different destinations, from South Africa to France.

The only thing we knew we wanted was somewhere in the sunshine. “When we came to Spain we actually looked at Marbella first but when we came to La Cala fell in love with it straight away.

“It’s very up and coming and is only 25 minutes from Malaga.”

They acquired their spot two years ago, which is now almost completely unrecognisable from its previous guise as an old working men’s cafe.

Since opening last Spring their reputation has blossomed. “We’ve just been growing naturally by word of mouth,” continues Lisa.

And things really started to move when they became TV stars, appearing in Channel 4’s A New Life in the Sun last month, with Lisa describing setting up a restaurant in Spain as ‘like going three rounds with Mike Tyson’.

Since it first aired their reservations have gone through the roof and they are now having to regularly turn away dozens of diners each weekend.

“I had to turn 20 away last Sunday which was really upsetting,” says Lisa. “So make sure to book early.”

They are doing a set lunch nowadays at 20 euros, as well as various events including a Royal Wedding special (practically sold out), and a series of wine tasting lunches, plus a seven-course degustation menu.