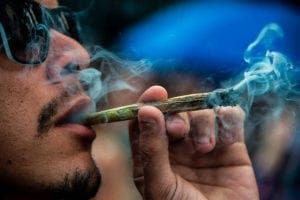 A PRIVATE cannabis club has been raided by police on the Costa del Sol.

The building in Fuengirola was advertised as a private members’ club to ‘promote the excellence and therapeutic qualities of cannabis’.

Police found 12 members smoking hashish and cannabis inside, including two Germans and two undocumented men, who are facing fines under the Protection of Citizens’ Security law.

Agents arrested a Moroccan man, the owner of the club, for his alleged involvement in drug trafficking.

Some 432 grams of marijuana, 345 grams of hashish, a knife for cutting, containers for classifying drugs, documentation, cannabis sweets and bottles containing CBD, a component of cannabis were all seized during the raid.

The premises have been sealed as the investiagtion continues.

Private cannabis clubs are popular on the Costa del Sol and are a growing trend.

The clubs are non-profit associations which grow cannabis and sell it at cost to its members via membership fees.

The clubs are allowed to hold around 5g of the drug on their premises per member, in line with Spanish laws on personal possession.

The Junta commissioned a study by criminal law professors on the ‘Therapeutic use of cannabis and the creation of establishments of acquisition and consumption’.

The study found such clubs are legal as long as they distribute only to a restricted list of legal adults, provide only the amount of drugs necessary for immediate consumption, and do not earn a profit.

But their legal situation has remained uncertain after the Junta never formally accepted the guidelines.