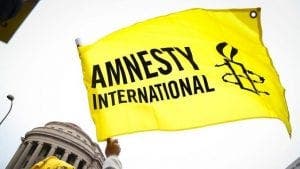 AMNESTY international has blasted Spain’s anti-terrorism laws after eight men were charged with terrorism offences for being involved in a bar brawl.

The fight, which broke out in a bar in the north, saw two policemen and their partners injured.

But the eight defendants, aged 19-24 and whose trial began today in Madrid, could face up to 50 years in jail after they were charged under anti-terrorism laws.

“Terrorism charges against eight people involved in a bar brawl, during which two law enforcement officers and their partners were injured, must be dropped and the incident investigated in line with ordinary criminal procedure,” Amnesty International said.

“This case is emblematic of the dangers that lurk within overly-broad and vaguely worded legislation, which can be used to criminalize behaviour that is far removed from any threat of terrorism.”

Amnesty International has long criticized Spain’s broad counter-terrorism laws and warned against amendments in 2015 that expanded the definition of terrorism in Spain.

The fight broke out in a bar in Alsasua, northern Spain, in October 2016.

Three of the accused have been in pre-trial detention since November 2016.

According to Amnesty International, one of the defendants is accused of making ‘terrorist’ threats, with a potential prison sentence of twelve-and-a-half years, based solely on the fact that they said to the officers:

“This is what you will get every time you come here”.

The hearing is due to end on April 27.