THE reservoir which supplies the western Costa del Sol was opened on Monday after officials deemed it over capacity.

The La Concepción reservoir, behind Marbella, had reached 102% of its technical capacity.

As a result the dam was opened to release some of the water, which rushed out at over 20 cubic metres a second into the nearby sea, reducing it to 99.98% by 6pm.

This is the third time this year that excess water has been removed from the reservoir. 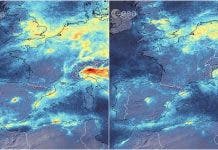