A STEPHEN Lawrence murder suspect who is wanted for drug smuggling has been seen hanging out in the Costa del Sol’s top bars.

British fugitive, Jamie Acourt – who was one of five suspected of murdering the teenager in a racially motivated attack – has been spotted in swanky celeb hotspots on the coast.

41-year-old Acourt is currently wanted by Scotland Yard on suspicion of his involvement in a €4.5 million (£4 million) cannabis smuggling ring.

His brother, Neil, 42, is currently serving a prison sentence for the drug dealing crimes.

The fugitive features on Crimestoppers’ ‘Britain’s Most Wanted’ list after he fled to Spain in 2016.

A source told the Sun on Sunday: ‘Acourt is enjoying the very lively nightlife. He rears his head every once in a while even though he knows cops are looking for him.’

The news comes on the 25th anniversary of the tragic murder of 18-year-old Stephen Lawrence.

Theresa May announced April 22 as a day of national commemoration of the teen today, which will take place every year.

Lawrence was stabbed by thugs at a bus stop in South London in 1993.

Since the incident, Acourt has always been accused for his involvement in the killing of the teen but has never faced trial. 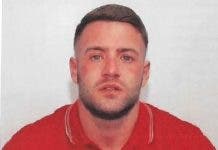