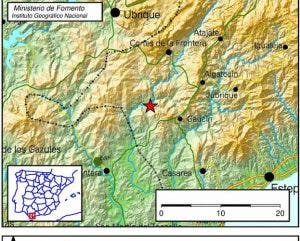 AN earthquake measuring 4.5 on the Richter scale has rocked a Malaga town this afternoon.

According to the National Geographic Institute, the quake, with an epicentre in Gaucin, took place at 13:13, some 12km under the ground.

The quake was felt in Gaucin, Ronda and parts of Cadiz, with noticeable tremors.

According to the fire service, there has been no significant structural damage reported.

Mayor Pedro Godino said classes have been suspended after part of the roof was damaged.

The CPB of Malaga has received many calls, mostly from Algatocín, Benaoján and Jimera de Líbar, from residents demanding information and warning of ‘considerable movement’.