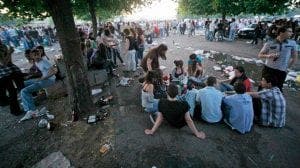 PARENTS of underage drinkers could soon be slapped with fines as a new law is set to be introduced in Spain.

It comes after a report from the Mixed Committee on Drug Problems proposed new measures to crackdown on binge drinking in minors.

The tradition among Spanish teens of drinking in the street, known as botellon, is blamed for the growing problem of underage drinking.

Now a new law regulating alcohol is set to be introduced, as the Spanish Health Ministry assesses the report’s findings.

However, the document suggests that teens and their parents could choose to take part in educational workshops instead of paying the fine.

It also stated that there should be tighter control over premises selling alcohol and even close places which are hotspots for underaged drinking.

Every year around 6,000 teens in Spain go into a coma due to excessive alcohol consumption.