PROTESTS have been announced across Spain after the alleged ‘wolf pack’ rapists were sentenced on a lesser charge of ‘sexual abuse’.

The five men, all from Sevilla, were accused of gang raping a teenager during the running of the bulls festival in Pamplona two years ago.

Following a highly-anticipated trial which was widely criticised as being more of a ‘cross-examination of the 18-year-old victim’, the accused were found guilty of a lesser charge.

The verdicts were handed down at a court in Navarre today. 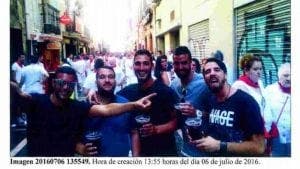 Guerrero, who is a Guardia Civil officer, was given a €900 fine for stealing the woman’s phone after the brutal attack.

After the verdict was known, protesters in Pamplona shouted: “This justice is bullshit!”,

A demonstration is planned outside Madrid’s Justice Ministry at 8pm tonight.

The prosecution had been seeking 22 years for each attacker and €250,000 in compensation to the victim.

They only received nine years after being found guilty of ‘continuous sexual abuse’, which carries a lesser sentence than rape because it does not involve violence or intimidation.

The young woman had told a court in Madrid how the five men, who called themselves the ‘Wolf Pack’ in a Whatsapp group, took turns assaulting her in a secluded building entrance during the Pamplona festival.

The victim, 18 at the time, had willingly kissed one of the defendants and was walking towards his car when the other four men joined them and took her to the secluded spot.

“When we arrived to the building entrance I became so scared,” she told the court.

“They took off my fanny pack and bra and started unbuttoning my top, then they grabbed my jaw.”

She said she became frozen with fear and didn’t know what else to do but submit.

“I just closed my eyes, I was in a state of shock.”

She said the men only talked to each other while they took turns raping her.

“I could not even look at their faces, I only remember seeing their tattoos.

“I remember them laughing and one of them saying, ‘hey man, it’s my turn!’”

The alleged victim told the court she has had nightmares and insomnia ever since, and had periods of deep depression where she ‘did not want to do anything’.

The victim was later found crying on a bench. She described her attackers to police, who arrested the five men the following day.

Prosecutor Elena Sarasate said: “The defendants want us to believe that on that night they met an 18-year-old girl, living a normal life, who, after 20 minutes of conversation with people she didn’t know, agreed to group sex involving every type of penetration, sometimes simultaneously, without using a condom.”

She added that if it was consensual, why did Guerrero steal the phone?

“The obvious thing would be to exchange phone numbers, not steal her phone,” she said.

Controversy arose during the trial after judges accepted into evidence photos taken by private detective – hired by some of the defendants – which showed her smiling with friends after the attack.

The woman’s lawyer said she was disappointed with the sentence and would be looking to appeal.

A spokeswoman for the Navarre regional government said it would also appeal after not agreeing with the verdict.

Simon Hunter - 26 Jan, 2023 @ 18:00
THE SPANISH government announced today that face masks will no longer be obligatory on public transport some time from February 7 onward. The Cabinet...